I had these made as an homage to one of the greatest movie posters of all time, the Endless Summer.

This limited run sold out on the first day of posting them to the Etsy shop. I might look into having [some] more made but might tweak the design a little bit.

So if you have a wheeled bag or carry a lot of stuff in the trunk of your car, it’s sometimes nice to protect the finish. Especially if the car is relatively new.

Up until a few weeks ago, I was using a towel, but I recently came across this bumper protector. It’s basically a soft neoprene mat that drapes over the back of your car. It attaches to carpet via Velcro.

It does the job pretty well. The Velcro, however, does pull on the fibers of the carpet especially if they are weak such as on the model three.

The mat is 29x12in and the perfect width to fit the trunk compartment cover on my model 3.

You can purchase it here >>>> https://www.amazon.com/Boot-Flap-Co-Bumper-Guard/dp/B075LW8WLD

So the GoPro mount turned out to be a better success than I thought.

The problem was trying to convince people to do their regular kendo and not worry about damaging the camera. It’s a GoPro ppl!!!

Some understood and would have happily tsuki-ed me all night long until I had to motion to yamae (I’m talking about you, Simeon and Okura sensei) but others were very timid and ended up just tapping the camera with the tip of the shinai.

The new backpack mount works great as a tsuki mount for GoPro.

It didn’t fall off.

I’ve been wanted to get this journal from

However, I wanted to start journaling right away, so I found this leather journal cover on Amazon that comes with a 3.5×5.5in insert with dotted pages. Replacement notebooks are cheap (you can use field notes, field books or moleskine cahier).

Compared to the Musha shugyo nikki (means “warrior quest/pilgrimage journal”) it is only $14.95 whereas the one from Bujin design is $54 plus VAT and shipping.

It comes with an elastic strap. Somehow you can insert three notebooks but I have yet to figure that out.

Hopefully by journaling I’ll be able to further incorporate what I learned during first and second practice.

Maybe if I get access to a laser cutter I’ll engrave something on the cover.

After ten years, I’ve decided to retire my gas guzzling 2008 Lexus 400H which has seen me to practice twice and sometimes three times a week and back and forth for the one hour total trip to and from home to dojo and back again (twenty minutes per leg) between adult and junior practices.

Having spent about $300 every two weeks to fill up the car five times (it’s a V6 and we live in an area with lots of hills) I decided to get an electric car- a Tesla model 3.

It’s not really $35K like teased, more like $52K for extended battery, color other than black and performance package plus tax and title fee for a total of about $56K. (Less the federal tax credit of $7500 that leaves $48500 or $46500 if you meet eligibility requirements for the state of California).

But is it a good kendo vehicle?

In the Lexus, I was able to get three regular sized e-bogu backpacks (21x20x11 in) and three shinai bags comfortably in cargo sideways with the rear seats in recline (not folded down or upright).

In the model 3, I probably could fill the trunk with four backpacks but the shinai bags would have to fill the front seat or lie on the rear floor.

I can fit a large roller bag (13.75×25.5×15.75in) and a regular size shinai bag diagonally but NOT a combination of backpack, roller bag AND shinai bag(s) (including fabric shinai bag with size 37 shinai).

Here is a table of dimensions:

There is a “secret” compartment below the cargo space which can fit a small cooler. The rear seats can also fold flat for additional cargo space.

It’s possible to fit the shinais in the trunk if you put them in sideways left side first.

To the etsy store. 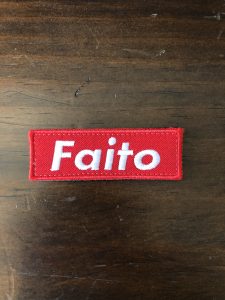